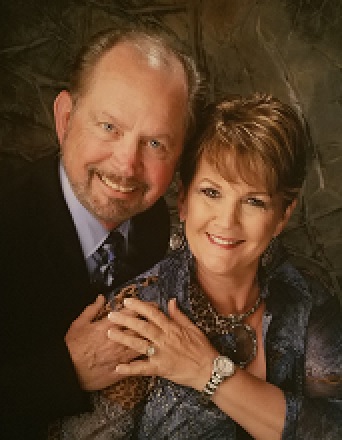 After graduating from Del City High School, Oklahoma in 1972, Ray joined the Air Force and was stationed in Lubbock, Texas when he was first introduced into the wonderful world of square dancing. After being transferred to Bentwaters, England in 1975, Ray joined a British-American Square Dance club, the Swinging Eights where he danced for several years. After leaving the Air Force in 1981, Ray settled in Springtown, Texas and joined the Springtown Revolvers Square Dance Club. While dancing with his club, Ray was encouraged by several dancers to do a singing call and the rest is history! He joined the North Texas Callers Association in 1983 after attending the Square-M-Callers School. He also attended the Frank Lane Callers College in Estes Park, Colorado in 1984. Ray spent the next several years calling for multiple clubs in the North Texas area and called for several years at Fun Valley in Colorado and for the past 10 years in Red River, New Mexico.

Ray and Linda met while singing in their church choir and after performing duets together, their love for music and each other was undeniable! They began performing at several opries in the North Texas area including the well-known "Johnnie High's Country Music Revue" in Arlington. Trying to juggle both the opry performances and square dance calling became difficult so something had to give and luckily, the calling won out! In an effort to keep the duets alive, when not dancing, Linda often joins Ray on stage and adds harmony to his singing calls. This country duo loves to carry the message of the lyrics in a way that makes the songs live and your feet want to get up and dance.

With almost 40 years' experience as a caller, Ray has become widely recognized for his dedication to square dancing, not only through his calling but through his strength as a teacher and instructor. Ray continually promotes the activity by teaching lessons and his commitment to student success and his encouragement of new dancers is evident. Ray is a strong believer in SSD, Social Square Dancing, and is currently the club caller for the Circle I Square Dance Club in Irving, Texas, and the Tri-Cities Promenaders Square Dance Club in Hurst, Texas. He also guest calls for several other clubs throughout the North Texas area. Ray has called in Louisiana, Oklahoma, New Mexico, Colorado and the Bahamas!